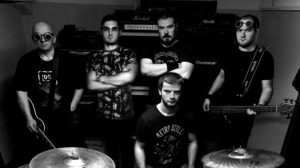 Please tell us about the history of your band and its members.

This all started in 2006 when I invited Petr (the percussions), Alexander (vocal) and Alexey (guitar, special effects) to drink a coffee and we became absorbed in this process. By the way of trial and error (adding milk, stewed fruit and tea to coffee), we released the first full-format album “Brownian motion” in 2010 and now (having increased a dose of stewed fruit by several times) we just have released the fifth album titled “Unbalanced”. From 2017 we having been “roasting” the coffee together with super guitar player Denis Maluga!

What’s the origin of the band’s name?
I myself invented the name and it doesn’t mean anything at all, but if to think deeply, scratch your head and ask Google, then it will give you the accurate answer – this is f…cking rock` n `roll!!!

Where is the band based out of and what is your music scene like there? Are there any local bands you could recommend?
The band is based in our home city Saratov but we also accept the help of people who live in other cities. Like Max Perepyolkin or Denis Malyuga. As for the music scene it’s as of any other place – many local bands, some venues, some people who visit the gigs. But very few bands try their best and work hard enough to get something more than 10 local gigs per year and a recorded single. In Saratov there are some bands that play metal of a good quality – Fetal Decay, Svartstorm, Rvi Mekha, Gonnalon, Radioaction, Ixort and some others.

How would you describe your style?
Druknroll it’s a smelly merge of contemporary and highspeed types of metal – progressive, symphonic, thrash, death, melodic death, modern. Also with addition of pop, rock, reggae and disco elements!!!

What have you released so far and what can someone expect from your works?
We’ve got 5 studio albums, 2 EP’s more than 10 official videos, we also take part in various national and international compilations. In 2018 we already released our new record called “Unbalanced”.

Do you have any new music in the works?
Yes, we already work on 3 new songs. Gonna record 2 or 3 more till the end of the year.

How about playing shows and touring, have anything planned out?
We have no touring plans right now. Just concentrated on working in studio only.

What plans do you have for the future as a band?
We want to shoot a new video and finish an EP this fall, the EP is going to be out early next year. And currently we’re working on our new full-length at full speed.

Where can we listen to your band and where can we buy your stuff?
Everything we’ve released is available at our label’s Metal Scrap Records shop. And you can buy something via our site druknroll.com. Our former drummer also sells some stuff. You can also find our music within iTunes, Amazon, Soundcloud and wherever else.

What is it you’d like a listener to remember the most when hearing your music for the first time?
Remember to listen his or her ass off and also bang head off! Druk’n’F…’n’Rock’n’Roll.