Congratulations on the new album! How would you describe the sound to someone who does not know the band?
Oleg Kireychuk: We wanted to give the record the release plan that we felt it deserves however due to a number of circumstances that are ultimately out of our control, we feel it’s best to get you the music as soon as possible. It’s all over the map. There’s some big, big heavy riffs that are happening, so that’s what I’m into.
Denys Malyuga: Thanks. I think it’s like the muscle car on drugs. It’s vicious, violent, crazy and fast.

How did your sound change during the last 14 years?
Oleg Kireychuk: We felt we needed to take a fresh approach to this sixth album. We never want to make the same album over and over again. We took an approach, a different approach to the whole thing, instead of going back to the past. We move forward instead of going back to the past again I feel we have a modern approach, a modern sound, without totally leaving past. There are songs on the record that are definitely more old-school. But, you know, it’s with that modern approach. I think we’re right in the perfect spot.
Denys Malyuga: It becomes more aggressive and rough. This album, I think, is much darker than previous ones.
Andrew Druknroll: Don’t know how did it change but it became heavier for sure. While recording the first track off new album I accidently turned the “Gain” knob on my amp to maximum. That’s why we recorded the whole album on extreme loudness.

How did DRUKNROLL come into existence?
Andrew Druknroll: This all started in 2006 when I invited Petr (the percussions), Alexander (vocal) and Alexey (guitar, special effects) to drink a coffee and we became absorbed in this process. By the way of trial and error (adding milk, stewed fruit and tea to coffee), we released the first full-format album “Brownian motion” in 2010 and now (having increased a dose of stewed fruit by several times) we just have released the sixth album titled “Freakingface”. From 2017 we having been “roasting” the coffee together with super guitar player Denis Maluga! For Druknroll the band DRUKNROLL is the only one and other coffee-lovers are also engaged in other projects. Alexander plays in the band SVARTSTORM, Oleg – in Diocaesarea, DreamSpell and Denis also makes quality covers for the famous metal bands!

You seemed to release your first albums in russian only, why the change to english?
Andrew Druknroll: I’m gonna tell you a secret – I’ve recorded a couple of albums in Mandarin. Studied hieroglyphs and ate my meals with chopsticks for a year! So what? Did you hear these albums? No? Sad, because me neither. That’s why I’m going to try khmer next time, a-ha-ha! Now serious, Druknroll recently became targeted for European and American listeners so our label Metal Scrap is promoting us heavily in that direction. Wanted to add that in an interview for Legacy in 2013 we answered the question about language like that – “the main idea is that we want to do this, we want our Russian listener to get us!” Don’t know why that was said then, I’m confused. So gonna learn khmer!

What is the essence of a DRUKNROLL song?What does the band name mean?
Andrew Druknroll: One came up with this name at least two decades ago and now the time has come to reveal the truth! I was often annoyed by media about that but I remained silent for so long and exclusively for Legacy I lay the cards on the table. The name consists of two elements. The first is the part with a twisted or informal variant of my own name Andrew – Andrew-kha! Drew-kha! Druk-kha! The second stands for “rock-n-roll”. And you don’t need to be another Sherlock to solve the puzzle. 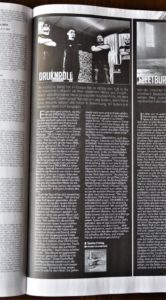 Denys Malyuga: Our songs shows no mercy for the listener. They’re pretty straightforward and honest. And as you know the truth is not always pleasing thing to hear.
Oleg Kireychuk: A lot of the songs we write is stuff that’s personal that we’ve experienced It’s really just a story of wherever we are as a band and where we’re at in our lives.

“Freakingface” is your 6th album, however, you are not very present in social media. Are you old school?
Andrew Druknroll: No, we’re not that oldschool. As it’s said here in Cambodia – Druknroll is really famous among narrow range of listeners. We’re present in VK or Facebook, we have an official site – druknroll.com. On our label’s site there is so much written about us – volumes of text! I offered 20 000 USD to one guy to do SMM for us but he refused, he wanted 50k! That’s why I have to do this myself, I write all the posts, my fingers are bloody mess already!

What do you see critical during these modern times? What are you expressing with a song like “Dead Phone”?
Denys Malyuga: Fuck this digital age. That’s all!
Oleg Kireychuk: Now it is important to do what you consider important for yourself and in what you see the meaning. The point of the song is obvious to everyone about Technocracy taking over the world.
Andrew Druknroll: FUCK’N’DRUK’N’ROCK’N’PHONE!!!