I am not too impressed by this band’s name, DRUKNROLL but I am however very much impressed by their latest album. So much that I had to interview them. Anders Ekdahl ©2016 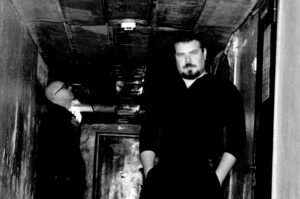 How different is it releasing an album compared to a demo where there were no real pressure?

Alexander: We create pressure by ourselves, stimulating to the release of the new album. We don’t want stagnation, we want to move forward and a single is like one more boundary approaching us to the release of an album closer and closer.

What response did you get on your last album? What was the weirdest response you got?

Andrew: I got multitude of positive responses about the album from such famous people as Juan Angel Martos (NECROMANCE #04/16), Berto (Lords Of Metal, Alexey “Astarte Eel” Irineev (ASTARTA), Andy (Heavy Metal Time Machine), Alberto Centenari, Tim van Velthuysen. I’m very grateful to them for the warm words! But if to speak about weird responses, here is one of them: «At first I thought that they are called drunk’n’roll (drunk roll) but sober look dispelled all doubts!»

When you release an album and you go out and play live and people know your songs, how weird is that? That people know what you have written on your own?

Andrew: At present moment we don’t give live concerts and of the reasons is that I play three instruments at the same time but we make video clips and put them on the internet.

Do you feel that you have to follow in the footsteps of the last album for a new when it comes to lyrics and art work for example?

Alexander: Of cause it’s necessary to move with the times and we keep to this regarding the sound and topics of our songs but, in my opinion, this should be done deliberately and reservedly. It will at least weird if I begin to read a rap in French or our music sounds in 8-bit format.

Do you feel like you are a part of a greater community because you play in a band?

Alexander: In any case, communication in this circle has an affect on the attitude to yourself and others. You understand that you don’t loiter about thoughtlessly on the street but go to reversal or return from the recording.

When you have found a sound how hard/easy is it to come up with songs that fit into the sound?

Andrew: Of cause, we even can’t say that we found the sound, therefore, we are in constant search, we constantly correct something or change completely. And writing of songs doesn’t influence the sound. When you compose songs, the sound is the last thing that you think about.

Such bands as Children Of Bodom, Soilwork, Mercenary, Degradead, In Flames are the example for us. Example of how to work and make quality music. We don’t try to imitate these bands, it’s important for us to make the material which could be put in line with these guys. For instance, Soilwork, they are mad about the quality of the record and readability of all instruments. This is besides that they write excellent material, why can’t they be the role models? Such examples can be found in many bands, there’s still something to strive for. Every album for us is like the revelation, we try to move only forward!!

We hear about what state the record industry is in. Then we hear that cd sales are increasing. As a band that releases records do you notice the state the industry is in?

Andrew: In the town Saratov, the native town of DRUNKNROLL, more than 10 large CD disks stores have been closed recently (and these are shops about which I know). Everybody sells through the internet but we issue digital copies as well as CDs. What if the Internet will crash down? And I stored up few disks for my fans!

What is your opinion on digital verses physical?

Andrew: Yes, of cause, now everybody switches to digit but physical media won’t vanish completely since the digit can’t be hold in hands or given as a present. Physical media itself can change and we will release albums on memory drives.

What lies in the future?

Andrew: New album lies in the future! Now the work is humming on the new material which we want to make in English. Now three songs are ready. We have a plan to issue EP of new material and also shoot video for one of the new songs!