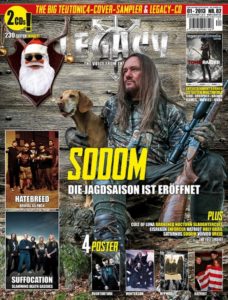 – Please introduce your band and it´s history –and all your releases so far- to our readers.

– Greetings! This is Peter from Russian metal band Druknroll. Well it all began in 2006 and I met Andrew – Druknroll’s mastermind. Back then we shared the same rehearsal place and recording studio. I was already a drummer in a local band – that time it was Darklord. Andrew had no band, but he and I definitely had something common, some musical chemistry that binds. So he decided to record one sole song just to express his ideas and he asked me to help as the drummer. And I said yes. He also invited our Darklord’s vocalist Alexander. And we recorded it – the first single “Metal Night”. Andrew played all the other instruments – guitars, bass, keyboards. At first it was just for fun, but then Andrew decided to record a full-length album. So it was a beginning of Druknroll as the band. A studio band, because we never played live. It was because I and Alexander had plenty of musicwork with our bands and Andrew was quite happy with working in studio. So we finished the whole album “Brownian Motion” in 2009 and it was released by New Rock Records next year. By that time another lead-guitarist Alex Knip was added to the line-up. The same year we started to prepare new songs. It all ended as our second CD “On The Blade of the Knife” that was released in early 2012.

– How would you describe your music – and who has influenced you? I mean, it seems to me, that that base of your music is thrash metal, but it is so much more. Also keyboards seem to be very important for your sound.

– There are a lot of influences and sources of inspiration because every musician in Druknroll listens to something that other members do not. And that is a spicy thing. Andrew was raised on oldschool European metal and he tries to look at modern music through this influence, Alexander listened to speed-metal, power-metal, classic heavy-metal and lots of Russian rock and metal bands. As for me I prefer lots of music, from hard-rock to grindcore. Alex likes blues, some electronic music, some classic rock. And that mix of differences actually is Druknroll. The keyboards play an important role because Andrew was a keyboardist and only after that began to develop his guitar skills and he thought it could be cool if we add some keyboards to the music just to make it sound richer. He thinks as a guitarist and as keyboardist at the same time so for him there’s no problem to combine these two instruments within one band. 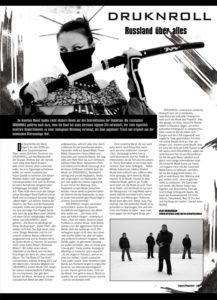 – Your music has a very positive vibe. Happy Metal, huh? Would you agree? Don´t you like all this grim, aggressive and dark stuff, that is typical for metal?

– I don’t think it’s very happy but I agree that there definitely is something positive in it. Lot’s of bands exploit aggressive side of music but we try to make something different. We do not deny the dark side of life because it is what surrounds us every day. But we wanted to show other things to share our feelings about. First of all – the humanity itself. Still there are a lot of thing left unspoken. Other bands say there’s no way out, we say there always is one.

– Why you use Russian lyrics? Tell us about what topics you sing? Have you ever thought about singing in English?

– The main idea that we sing in Russian is just because we want to do it, We want our Russian listener to understand us. Lots of Russian bands choose English because they think they will gain foreign success – that is their main goal and not music. Our goal – to play music that goes from our hearts and to be understood.

– How do you create your music? Do you need a special mood, daytime, place, or something to create your songs?

– Actually I don’t know the whole thing because it is Andrew that writes everything. But lots of songs have some influences and sources of inspiration. The song “S.O.S.” from our first album is about that submarine “Kursk”. “Raven” is inspired by Edgar Poe’s poem of the same name. Some are about experience and something that happened in our lives, some are of imaginary source.

– What can you tell about the Russian metal scene? What bands should we now? What styles are important in your country? Do you have a living and breathing scene?

– I began to explore Russian metal scene maybe at the time we started as Druknroll and I can say there are lots of bands. It’s alive and breathing. Some bands are good, some maybe not so good but still there are many interesting acts to listen to. They all have something distinguishing in their sound, music or image and that is cool. And nearly all of them are underground bands so foreign listener might not know about them. As for me the most interesting band from my point view up to date are Shturm, Dehydrated, Way of the Sun, Kartikeya and may others. It would take time to recall all of them.

– Would you say that being a Russian band has a special influence on your music? I mean your cultural background…

– Yeah, the background. The thing is that to retain our cultural background the band in my opinion should use native lyrics. Now lots of bands are turning towards Europe and USA using English language. I’ve listened to these bands. They sound cool, their music is cool, everything is cool but I don’t consider them fully Russian. There must be something very special about the songs. As for us I think we won’t be Druknroll without being Russian. There’s always something special about it.

– Pussy Riot – what do you think? Do you think music should be political? Are you interested in politics?

– Nowadays it is impossible to be not interested in politics because it is everywhere in our lives. Mass media became dependent on politics – like you write this or you won’t publish a thing in your life. That’s very sad. It’s “democrazy” so to say. As for Pussy Riot – I think they do not deserve such a sentence. 2 years of prison for the dance that’s ridiculous. But also sad but true. Even murderers get less. The music itself can be political but not always, because if you make music – you make music, if you make political music – it’s politics and music is just background. I like metal music because it corresponds my feeling, my views, my opinions. Political music can be anything – metal, jazz, pop, hip-hop. Because the goal is to convince. Okay there is some form of protest but there are lots of more important things to be against of.

– We nearly have December 2012 – do you believe the world will end..like they said in the old prophecies.

– I don’t believe in it. In Russia we say – there would be no Apocalypse, because the entire budget for it is already stolen. Anyway if the prophecy is true and we all are going to disappear – there’s no point to be afraid of it because there is nothing you can do with it. Just try to make people you love happier

– Thank you for the interest and stay true to yourselves.