(Alexander) Our new release full-length album “Boiling Point”  is our view of the world, its problems, thoughts and desires. Each track is the embodiment of our thoughts.

(Andrew) We are quite happy about the final version of our album, because Alex Knip has brought and made this and our previous album. The material is very dynamic with a diverse mix of styles and trends. 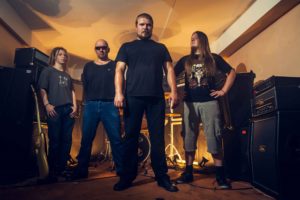 (Andrew) The whole album is penetrated by hellish mix of high-speed styles – symphonic, melodic, progressive, alternative, but there are a lot of ballads with a lot of acoustics. The lyrics are very emotional, bringing to the boiling point that really “blows the roof”.

(Alexander) It took a lot of time; it took a whole life in the Studio!

(Andrew) We’ve been working for the album for 2 years.  It was recorded, mixed and mastered at the Saratov Musical Studio “METALHEARTS”.

(Alexander) We are trying to reach everyone with our texts, everyone who is indifferent to his life and his future.

(Andrew) The Main ambitious goal is to gain a foothold in the global metal scene!

(Alexander) There’s only one version.

(Andrew) The material was published 1000 copies in CD format.

(Andrew) All the things we have asked for our label Metal Scrap Records, which is actively engaged in the distribution and quality promotional support in Ukraine, Europe, Russia and the United States. In Russia the distribution also engaged by CD-Maximum.

(Andrew) You can order it from our label Metal Scrap Records (http://metalscraprecords.com/shop/en/store/product/view/1/3718).