Hi there! Peter, Druknroll’s drummer here. Now we’re working on our new record, our third record already. Still there is no title, no concept. Just few songs that we have recorded and a couple of more ideas to expand. But we hope see the release in the end of 2013 or early 2014. 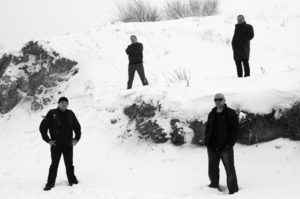 It all started as a studio project in 2006. My friend Andrew who is the main songwriter and guitarist\keyboardist in Druknroll had some ideas that he wanted to build into songs. So me and our vocalist Alexander agreed to help – back then we both played together in a local band named Darklord and were good friends with Andrew. So we recorded a single “Metal Night” and thought that was all. But then Andrew thought that it would be a great idea to record the whole bunch of his ideas and to make a real album. While I and Alexander enjoyed playing shows and recording with other bands we also dedicated some time to Druknroll. And by 2009 we had the whole thing recorded – the CD “Brownian Motion” was released the following year. Soon we began to prepare material and to record song for the second CD “On the Knife Blade” that was released this year. And we have a new band member, that’s Alex – our lead guitarist and sampler. He’s awesome. Without him the album wouldn’t have sounded as it actually does.

It’s definitely metal. Heavy metal. With some elements like progressive, thrash, modern, symphonic etc. Every song has its own mood. Andrew usually adds a lot of keyboard tracks to the songs so the sound is very heavy, you know. But it’s no extreme metal even when we add some blast-beats and growling– it’s just oldshool-oriented heavy metal with some modern elements.

There are a lot of, from hard rock to death metal. We not only listen to out favorite music but also listen to some new bands to keep up with modern music. Our recent explorations – Dunderbeist and Scar Symmetry. We’ll see what’s next.

There are a lot of different reviews – some liked our album, some not. Of course it depends on the person – we’re not a buck that everyone likes. And what is very good that we receive reviews from different parts of the world and we appreciate it. Comparing to the first CD’s feedback that’s quite a lot – unfortunately “Brownian Motion” gained much less interest.

I think yeah. The record is nice, there’s some positive feedback. Quite enough for the studio project that never hit the stage.

Well, maybe it’s “alive”, “unusual” and “metal”. Or you may call it three times “metal” – you won’t tell lies))) Anyway there are lots of words to describe it. Even we, the musicians, may have three different opinions – and that is nine words already. It also can be described as “Alexander”, “Andrew”, “Peter” and “Alex” but that’s four words.

It was in some ways faster and easier. When recording our first studio effort we all lacked much experience but now we developed some recording scheme that satisfies everyone. Nearly all songs from “Brownian Motion” were just ideas and we spent a lot of time to shape them into songs and to make them sound right. We even rerecorded the whole album back in 2008 just to get rid of mistakes we’ve made. And that was a wise decision because the final mix was good. We made the new record recalling the whole previous experience. So it didn’t take much time.

All the songs are written by Andrew. We don’t interfere. We may add something during the rehearsals but it’s still minor participation. And maybe it’s good because it was Andrew who started the whole thing. Still it takes little time to record a song when he comes up with the ready one.

I don’t know for sure. Maybe we’ll get the full line-up for live shows that we didn’t ever play as Druknroll. I and Alexander have plenty of work to do within our bands so it is up to Andrew if he wants to play shows. For now we enjoy our studio work.

Thanks for the chat and stay metal. Cheers!