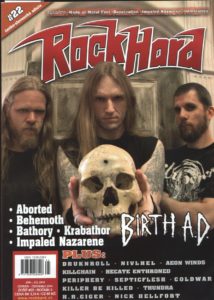 Petr. Ahoj, Rock Hard! It’s nice to know you’re familiar with Russian language, because I also know a little in cestina – thanks to my university. As for the band – it consists of the main songwriter and mastermind Andrew Druknroll on guitars, bass and keyboards (on crazy ideas also), Alexander on vocals, Alexey Knip on guitars and digital effects (he also does all the recording stuff) and Roman on drums.  I am Petr. I was the first drummer on all the three CD’s, but recently I had to step out of the recording line-up due to lack of time (I’m busy with my other bands which are too active now), but I remained a member of Druknroll staff as “big friend of the band” and “the guy who chats with media”.

Petr. – The cover simply describes the man – the average man – who is fed up with all the crap that surrounds him, fed up with the problems he has to deal with, fed up with people around him. And he begins to boil. Literary! So this can be anyone – even you and me – who may boil when problems heat you up like a kettle on fire. And we decided to make the steam red, because blood that runs in our veins is red so there was no sense of making the steam white. So the man boils when he reaches the point of “I’m fed up with all this crap”! And there are certainly songs with the themes that describe what problems you may have – fury, anger, substances and certain circumstances.

Andrew. Group name has no relation to the drunken roll. I’m rather that “sober-roll” last two years.

Andrew. I did not have any experience in recording or in live performances in 2006, I just played the guita. In 2006 I put together great musicians and we started recording our songs, a lot of material rerecorded again, experimented with sound and didn’t hurry, so the first release only appeared in 2010. The last album has been recorded for 2 years. 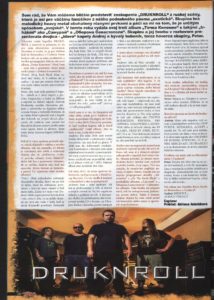 Andrew. We are satisfied with our label. Metal Scrap Records team is very professional and always takes care of his bands. We just write songs and send them to the label, and eventually get everything licensed CD, which are sold in Ukraine, Russia, Europe and America, advertising in the press and in the internet , interviews and reviews in magazines and on the internet. We’ve been invited on tours.  It’s great!

Andrew. As Peter said, the main inspiration and composer is me, but without my friends – musicians, with who I work, there would be no songs.

Petr. Lots of bands influenced on us in certain ways – some inspired us to be musicians, some influenced on playing skills, some gave us the understanding what music we really like. As for me, lots of bands inspired me in this or that way – from such monsters as Yngwie Malsmsteen, Pantera, Def Leppard, Helloween and Manowar to modern talents like In Flames, Dead By April, Behemoth and others. I also admire some Russian bands that really stand for what they do and they’re really good enough to be proud of.

Petr. We don’t use English because we don’t need it, because  we’re just Russian metal band that doesn’t want to gain success with making songs in international language, we don’t think that it  really helps. I know some bands that write lyrics in their native language – Rammstein, or Arkona for example. And I know some bands that make songs in English only and they really suck. So for us the language is not the mean of gaining popularity,  we have to have something behind our music, we have to be creatively strong, that’s the point.

Petr. The situation in Ukraine is very sad of course. And we wish all this crap will end soon. They should not kill each other.

Andrew. I have great respect to the fathers-founders of metal ( like Deep Purple, Metallika, Accept and many others). They were my first teachers.  The world is changing, life goes on and now I have come to modern bands like Children Of Bodom, Soilwork, In Flames, Mercenary, Degradead and I think we will also move in this direction.

Petr. I think no, because we haven’t gone on tour yet. It’s not just the matter of a full line-up, but the matter is lack of time and dedication to other projects and bands.  All of us are very busy with such things as family, business and other creative endeavors. It’s not easy to start a band now with all that recording and touring, you know.