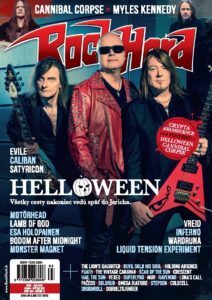 Denys: Cheers from Russia! Our appetite is eternal for sure!

Druknroll: Hello! The water-level in Volga river just had fallen thanks to local drinkers. We wrote all the material before coronavirus outbreak, that is why our minds didn’t suffer that much within this album. But while writing new songs during the pandemic at its highest we literary went nuts. Here’s some lyrics: “My mind has been captured, they made it burn with rage! My mind was wired up, connected to high voltage!”

Druknroll: No, they are not really new members. Alex Knip worked with us for a long time, he just didn’t advertise that. He tracked the band, did mixing, played some instruments. Now he is doing only vocal tracking. Oleg Kireychuk took his place and now he is working on new Druknroll album – tracking, mixing and playing on everything that sounds or not.

Druknroll: She is fine. She just takes complex songs of Druknroll and makes our music more diverse. Because our vocalist Horror annoyed everyone with his screams and growls. And suddenly you hear mellow female voice!

Druknroll: These EPs we released not only digitally but also “physically” – as vinyl magnets. Super limited edition of 12 copies! 13, exactly, because one is already on my fridge.

Druknroll: Perhaps. We wanted to put out the album in spring but due to the pandemic and the lockdown the release date was postponed till summer. Then Anatoly, our chief at Metal Scrap Records, suggested we make another digital EP so we did that. If the lockdown didn’t stop we could also put out EPs like

“Doomed Phone” or “Dead Love”. By the way our label Metal Scrap is distributing our music worldwide for a decade already. 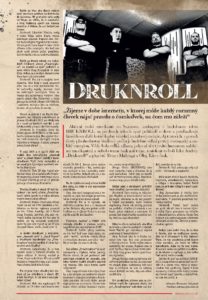 Druknroll: We had 79 songs written, we spent 79000$ for 7,9 years of recording. Then some wise old woman said – hey, don’t waste your time, leave just 2 songs, the others are shitty. We agreed and left 10 songs instead of 2.

Oleg: We are quite busy and we are engaged in other musical projects, so 2 years is just a coincidence!

Druknroll: It’s no coincidence but effective management. For a year and 11 months you just fuck around and then do an album in 4 weeks! Like diarrhea!

Druknroll: There are no such plans but who knows? When we run out of rhymes like “girl – world” in English then we do a Russian album with the same lines “devka – mir”. It’s not a rhyme but sounds great.

Oleg: We just listen to a lot of different music and it is interesting for us to experiment with different hot and musical ideas. If it sounds good, then it has a right to exist. In addition, we all have a different musical background and this has its impact.

Denys: All of us (Druknroll) are pretty unique people and we’re understand that our listeners are too. So we aimed to give all kinds of emotions to them. I think we done our job well.

Druknroll: I am always afraid of this question. First I have to get inside my mind, delve into it thoroughly and take out the most secret, often dirty, thoughts. Then lay them all on the floor, squeeze them with hands and feet, then embrace and warm up. Only after that if I am lucky the lyrics are born that would be placed on music.

Oleg: We recorded it at the Saratov live line studio. Where I am a producer and chief sound engineer. So the choice of the recording location was obvious. We wrote it down pretty quickly and were very pleased with the result. Long years of work give a positive result.

Denys: Personally I did my recording session in a comfortable way just sitting in my house. The conditions were so nice and relaxed that sometimes I had to push myself to get solos done. 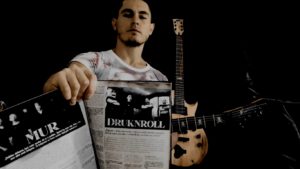 Druknroll: The cover depicts our entire lives – diverse and thrilling!

Oleg: Of course. And I combine all these roles as a multi-instrumentalist. I actualy use virtual instrument

Druknroll: We can play not only gusli, we went further. Now we are working on a track with a one-string guitar, drums with no drumheads and synthesizer with the keys chewed by a hamster. The hamster is the singer by the way.

Druknroll: Fuck politics! Druknroll is a politics-free band! Fuck COVID-19, by the way the virus is also politics-free. We live in the age of Internet where any sane person can find the truth about anything he or she cares about.

Druknroll: It is not clear. In winter 2020 I went to an In Flames gig in Moscow that was packed with hundreds of people who sang all the lyrics with the band. A week after the whole country was locked at home and yelled Druknroll lyrics drinking beer and vodka.

Druknroll: Of course! Expect another full-length in two years. While this year we are planning to shoot a new video and to release an EP “Doomed Dead”, ha-ha! Sent you some vodka and matryoshka riding a bear who can play balalaika as we do. See you!