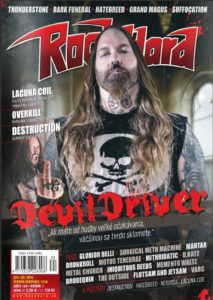 I´d like to start our conversation with the new album “In the Game” as it hits the world in these days. Comparing the new stuff with the previous “Boiling Point”, where do you see the main distinction and progress in?

Andrew. We still play Modern metal – this is the progress! The album was published on the favorite label Metal Scrap Records and this is also the progress! (By the way, this is already third album on this label!!!). Speaking seriously, the main progress is priceless experience which we have gained during the work on new album. It seems to me that new stuff is more energetic, rapid and qualitative, there are less minor hiccups and inaccuracies!

This is a traditional question (and the others as well) but it just has to be asked. How were all the technical preparations and the recording itself going in the studio?

Andrew. We have been recording in our studio for the last 10 years. We assembled serious device in the studio but we also use modern soft! Usually we work on one track for 2-3 months and when it’s ready 100% we move on. Of course, this complicates work on mastering when the album is ready. Because the sound becomes out of date for 1.5-2 years and we have to make many changes in sound!

What is the main topic of the new album? (lyrically…)

Andrew. The main theme of the album is directly shown on our cover – this is dangerous, hidden, global world game where the lie rules the world! The key is that is should be only the game…

I´ve found the cover artwork very apt and original. I am quite curious about the artistic work. So, who stands behind this work?

Andrew. I came up with idea from the song with the same name which is in the album. In artistic way everything was done by our ex drummer Petr who doesn’t only play the drums and guitar excellently but also draws perfectly! By the way, he also made the covers of two previous albums “Boiling Point” and “On The Knife Blade”.

The sound of the new album, and not only that, is really great and impressive. Was it easy for you achieve this sound or, you had to spend a lot of time in the studio?

Andrew. Yes, sound is always the problem! Our solo guitarist and special effects master Knip manages the sound! He is responsible for everything from record to mastering! We don’t spend much time on sound on studio, Knip always have tried and tested presents which he applies skillfully! By the way, many local teams record on Metalhearts and Knip also works with them.

Watching the video “Defense of Sevastopol”, I was very impressed by this video because of its high quality and the music as well. I spent one week of my summer holiday in Sevastopol and near area three years ago. What does mean history (especially World War II) of your nation for you? Why did you find so important adapt this story for the video?

Andrew. To avoid false rumors, I’ll tell right away that DRUKNROLL is out of politics. Video “Defense of Sevastopol” was made in 2013 before the well-known events in Ukraine. In Sevastopol there were many historical places which preserve spirit of that time and in video we combined these shots with shots of documentary newsreel. Historical memory – this is the main message of this video. At first in 1853-1856 people saved their native town and then their grandchildren and grandchildren made the same in 1941-1945.

Going through the band´s history, I see names like IN FLAMES, SOILWORK, CHILDREN OF BODOM, etc. there. If influenced by such bands (and others), what interesting do you find on this music? What other genres of music are welcomed in your private room when relaxing?

Alexander. These teams are an example for us. Example of how to work and how to make the quality music. We don’t try to imitate these teams, it’s important for us to make the material which can be put on one shelf with these guys. For example, Soilwork, they are mad about quality of record and recognizability of all instruments. This is in spite of excellent material that they record! As good as any role model! Such examples can be found in many teams and there’s still something to strive for. Every album for us is like and revelation, we try to move only ahead!!

What do you think, what directions is taking the metal scene in Russia nowadays?4845

Alexander. Nowadays in Russia culture of metal music is very unstable, teams turn their concerts into some sedition or it’s strange madness that makes audience behave inadequate. And this is if people come to the concert at all! For the last years it became the problem to drag devout public out for concert of that or another group, people prefer to listen to everything at home, using Internet. Live performance lost its value and is not interesting to almost anybody.

It is important to keep physically fit when on tour and stage. What is your way of keeping yourself fit when touring?

Andrew. The group DRUKNROLL doesn’t smoke, although 5 years ago Alexandr and I smoked like steam locomotives! Moderate drinking of alcohol is also formula for success, and if to run on stadium three times a week – this is classy and we work for it!

By the way, when thinking about relaxation and looking on the map, the Volga river flows at Saratov. Do you go for fishing there?

Alexander. To live on Volga and not to go fishing is unreal! We go to islands with tents every summer. Fishing, alfresco lunch, swimming, drinking, fresh air and Volga!!! It id very beautiful and those who came here from other region never forget what Volga River is.

Where will we see you on the tour 2016 in Russia and abroad? Some festivals confirmed?

Alexander. We still haven’t begun concert activity though our label sent us a lot of invitations for tours! We are preoccupied with work in studio and you can see us in our new video clip which we plan to make in autumn! And we issued 2 video clips on songs “Beyond the line” and “Wolf” in support of this album!

This question is out of the music line. Have you been to XXII Winter Olympic Games in Sochi? (If yes) How did you like it?

Andrew. Yes, of course, we were on Olympic games in Sochi, but not physically but virtually! Those days we didn’t have time for work. The TV smoked of round-the-clock operation and the neighbors knocked on the battery hearing in the middle of the night hellish shout: “Gooooal!”

At the end of this interview, I´d like to thank you very much for your time and kindliness. I wish you all the best as band and in personal life and hope to see you on stage live. A few words for our readers would be healthy.

Andrew. Thanks! I want to tell that I love our listeners, especially, Czech and Slovaks because in the childhood (it was one country Czechoslovakia) I was in pioneer camp in Slovak town Trenchin where we played the football with local boys, ate Bulgarian pepper with bread and solved Rubik’s cube (I brought home 5 such cubes!). Those were happy days! And I have carried this love through my life! See you next time!