Even though your band has a history of approximately 12 years, your music may have not reached everyone yet. Please tell us something about the birth of the band and your beginnings. Is Drunkroll the first band the individual members play in?

Andrey: This all started in 2006 when I invited Petr (the percussions), Alexander (vocal) and Alexey (guitar, special effects) to drink a coffee and we became absorbed in this process. By the way of trial and error (adding milk, stewed fruit and tea to coffee), we released the first full-format album “Brownian motion” in 2010 and now (having increased a dose of stewed fruit by several times) we just have released the fifth album titled “Unbalanced”. From 2017 we having been “roasting” the coffee together with super guitar player Denis Maluga! For Druknroll the band DRUKNROLL is the only one and other coffee-lovers are also engaged in other projects. Alexander plays in the band SVARTSTORM, Alexey – in RADIOACTION and Denis also makes quality covers for the famous metal bands!

What has inspired you to create the band and who were your musical idols?

Andrey: The answer is easy – ambitions! I have been playing different musical instruments since the childhood: guitar, piano, balalaika, triangle, saucepans and nerves and in 2006 the time came to satisfy my ambitions!

Denis: During the period of my musical evolvement my idols changed. And the idols – this is rather overstated. However, there are some bands and persons that I would like to mention. Thanks to the well-known band Metallica, I plunged into the world of hard music and began to play the guitar. Also I was influenced to different extents by Zakk Wylde and Dimebag Darrell

Why did you choose the name Drunkroll and what is its meaning? Is this the name you have used from the beggining, or were there any changes?

Andrey: I myself invented the name and it doesn’t mean anything at all, but if to think deeply, scratch your head and ask Google, then it will give you the accurate answer – this is f…cking rock` n `roll!!!

Who is currently in the band? It is written in the materials, that there are 3 members, however I can see 4 people on the photos.

Andrey: I’m confused myself! It seems that there are about 10 people in DRUKNROLL team. Some of them write the music, others are filmed in clips and there are even 5 people in the new photo!

Who are these people? Stop! Stop! Yes, I know almost all of then, they are cool guys but who is this bald devil in glasses to the left?

I have to admit, that I have heard your music for the first time from the materials about you. These materials also say that it should be melodic heavy metal, however the reality is a bit different. It is possible to hear a great influence of groove and even death metal. So how was it in the past, how is it now and who are your current musical influences?

Denis: I prefer the old school more. NWOTM inspires me till the present day. Among rather new bands I would mark out Lost Society, Havok, Revocation and add already proved Carcass and Lamb of God.

For the people who have not had the opportunity to get in touch with your music, can you tell us something about the lyrics…? What are they about? Who writes them and where does your inspiration come from?

Andrey: In the past the texts were written by me Dmitriy Tolgaev – the brother of our vocalist Alexander. Now only I make the texts since I switched to English language. The God gives the inspiration and the songs are of course about our sinful life!

You have already recorded 5 albums and 2 EP´s. Approximately until 2015, the names of songs and albums were in Russian and then you have converted to English. Why did you choose to do so and how will it be in the future?

Andrey: First of all, this is an experiment. We would like to try something new. Secondly, the musical critics induced us to this step to make the texts available for wider world audience, although, from the other hand, I was recently listening to the cool material by the band Frater — Pulso en Eclipse (2017) in their native language, and it seems that if they wanted to sing in Chinese, this would be equally great!

How do you write the lyrics, does one man write it all, or does everybody participate ? Who decides that a song is finished? How often do you meet up on rehearsals, writings of new songs etc.?

Andrey: Yes, I write all lyrics and then give the material which I has recorded on the phone to the violinist, flautist, accordionist and balalaika-player (I forgot a man with a triangle), we sit in the studio and record the songs!

Do you compose the exact number of songs that will be on the album, or do you create more of them and choose the best ones only? 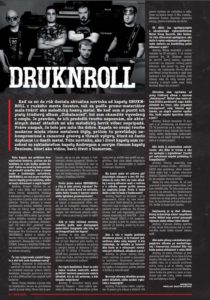 Andrey: We work in the following way: we write 10 songs for the album and carefully cover 150 other songs with naphthalene and put them to the garret till better times! (it’s a joke) We don’t have songs which lay on the shelf, we throw everything into the fire!

You collaborate with a Ukrainian label Metal Scrap Records. How do you rate this relatively long cooperation, how did your cooperation start, do you have a contract for a concrete amount of albums etc.?

Andrey: We have a contract with the label for 33 albums. We have made 5, now 28 remain. We will work off for the rest of our lives!!! Jokes aside, we don’t have a contract for a particular number of albums (but we wouldn’t be against it), but we release the fourth album at Metal Scrap Records and are satisfied with its work again! Anatoliy (label director) always offers so great conditions for cooperation that Nuclear Blast can only dream of it!

Currently, your fifth studio album „Unbalanced“ is coming out. Can you tell us more about the album, how many tracks does it contain, what platforms is it coming out on, will there be any special edition..?

Andrey: The album contains 10 tracks and is released on the standard medial CD-1000 copies, this will be enough to hang it on the windshield in the car or fly it like a boomerang or scratch it with scissors. And also the album can be found in the Internet and in my pager!

Where did you record the album, how long did it take and are you satisfied with the results? Were there any problems or complications during recording?

Andrey: We made all the material in our own studio «METALHEARTS»! What problems and complication can be in your own studio? None! The problems can arise if you don’t have your studio…

Denis: I will add from myself that I worked with ready material while composing solo. This was my only function in this album. In general, there were no complications. I’m glad that the guys liked my work and I hope that the listeners will appreciate the album since it’s going to be really powerful.

The cover of the album is interesting as well. Can you tell us the meaning and/or the message of it?

Andrey: The meaning of the cover is that if your brain is unbalanced, then it will be difficult to get the balance back!

What are your plans about advertising of the new album? What about touring, where will we be able to see you in 2018?

Andrey: Generally, our favorite label Metal Scrap Records is responsible for the advertising. As for the second question, I was afraid you would ask! I will tell you secretly that now I’m sewing the third arm and when everything is ready, I will go to the tour at once! Now I’m playing the guitar and bass guitar with both hands, and hardly have time to play the keys and drums!

Thanks for the interview and I leave the last words for you.

Denis: Listen to the quality music and support little known performers. Who knows, may be in the future you will be the ones who was at the origin of something grandiose!